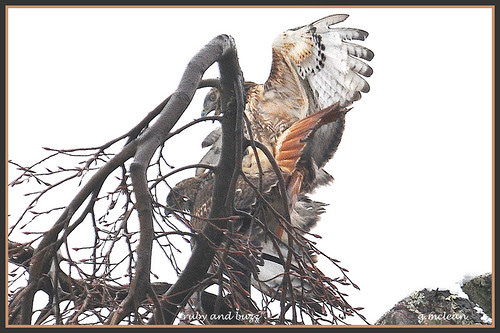 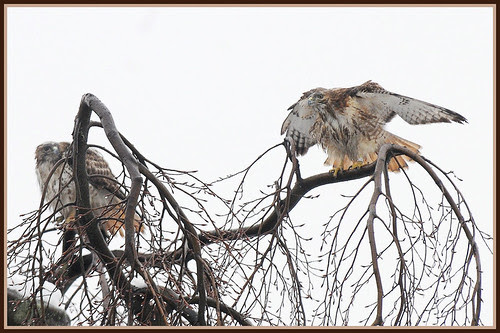 Bonnie’s comments make it sound as though there was not actual copulation, but I don’t think we should see Buzz as acting “brutish.” His job is to bring food to his prospective mate and to bring materials for a successful nest, and his natural instincts are to do that and to copulate (frequently) with his mate. That increases the chances for successful fertilization and actual reproduction. He is the initiator. Bringing food, having it accepted, and bringing sticks and other material for the nest further stimulates his hormone stream.

The female has greater physical demands at this time. Her hormones are flowing. She has apparently selected to “keep” her same mate. Her reproductive organs have to be restored to full size and capability, after atrophying over the fall and winter. She has to accumulate enough body fat to enable her to form and lay eggs, which are a significant percentage of her overall body weight, and for her to survive for a more than a month while incubating. (She will be dependent on her mate bringing in food to her during this period.) There is obviously a strong biological component in action here. Buzz is doing exactly what he should be doing, checking to see if his mate is ready to “mate.” She is signaling that she is not yet ready, which likely drives him to bring more food and more sticks, both desirable actions. Sydney’s report from Wednesday suggests that has been the case for several days.

When she is ready, you likely will not see any difference in her prior to successful copulation. (In other words, you and Buzz will both be in the dark until he lands on her back.) When she is ready, she will crouch down to make it easier for the male and she will turn her lower body in an awkward manner so there can be cloacal contact. It is easy to see why it is brief, because it is so awkward. No “penetration” is involved.

This is all normal. In the WOW pair, we frequently observed unsuccessful attempts, where the male (Rocco) brought in sticks to the nest, food to the nest, and still found Jolene unresponsive. One he brought in a squirrel to the nest for her, but she was not sitting in the nest, and she didn’t fly to get the squirrel. Rocco tried to mount her but was unsuccessful, and eventually he went and got the squirrel and ate it himself because obviously $#%&^# didn’t want it.

Every instance of unsuccessful attempts is interesting? How long does this go on before it becomes for real? How long after “for real” does she lay and start incubating? What food is Buzz bringing in for Ruby at this difficult time of year?

Seeing Sarah’s and Claudia’s reports of other redtails. Unattached females, especially second and third year birds, are looking for a mate, so might well checkout the good looking guy with a substantial nest in trendy country. Also, in two of the pairs that I followed earlier, I saw what I presumed were at least one of the young of the previous year return to the nest site in February or even in April, where they were tolerated, but not when they attempted to enter the nest where they had presumably been hatched. (In one case, the young was physically kicked out of the nest by the female and was never seen there again.) In one case two young hung out with both parents at least until the end of February, which is apparently what is currently going on in Mt. Auburn, where it will be interesting to see what the adults do with last year’s chicks once they get a new nest completed.

There is a lot to look for and learn from! Per Bonnie’s comments, I am working on a manuscript on what happened last year at 185 Alewife. Writing a book-length document is a lengthy and time-consuming process. And then I need to find a publisher that will accept a partial or complete manuscript and go through the whole editing and publishing process, so don’t hold your breath. At some not too distance point I will also be contacting man of the people on this list for their remembered observations and reactions to what they saw last year.

Paul
Posted by kathy at 6:20 PM No comments:

In the spirit of accuracy, after reading Paul's dx below I'm thinking what I saw was an osprey-like failed attempt on Buzz's part. There was not a warm reception from Ruby, though Buzz did get right on her back and stay for maybe 2 seconds, I think it was more of a brutish attempt at romance than the real thing. Sorry Buzz-fans, but he didn't seem to be his usual sweet and nurturing self at that moment! I'm sure he will convert back to dutiful husband and father once the courtship moves along a little further!

Loved the osprey story, Paul. When are you going to write our book to compete with Marie Winn's Tale, by the way?

And what will they do today in the snow? I spotted Buzz in the rainstorm day before yesterday, because my mother (Honey) asked me to find out where they go in such bad weather. He was on the right corner of the 185 building standing on the roof, or maybe in the gutter itself, looking more bedraggled than Larry the day after hitting the building last year. He was just standing there in the rain, shaking off droplets now and then but mostly just waiting it out.

Whoever goes to look at them in the snow, please write something entertaining for those of us who can't stop by today! and Ernie, did you post yesterday's photos? I'm glad you got to meet Jim (my partner who was the second mystery photographer in yesterday's update) who went in my stead to take a look while I held vigil at Honey's bedside.

Looking forward to spring!
Bonnie
Posted by kathy at 4:22 PM No comments: