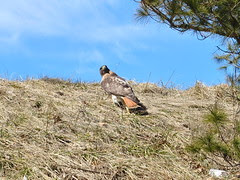 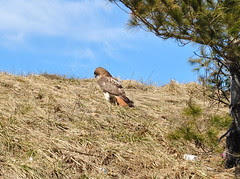 We’ve been seeing a lot of activity at the nest, which is a good sign. Buzz has been bringing in plenty of food for Ruby, to the point that she is not eating it all when he brings it in. Another good sign that suggests she has accumulated the nutrition and weight to lay eggs, a significant drain on her physically. Intriguingly, of the food deliveries I have seen, none have been birds or squirrels. Everything I’ve seen has been a vole (microtus sp)., presumably meadow vole. I impressed that Buzz is finding so many voles at this time of year and that he appears to be avoiding birds, especially pigeons, and squirrels.

I’d be grateful if observers who have binoculars when observing – or take photos of – food deliveries would attempt to record the species or prey type brought in, including when Ruby is incubating in the nest. (Photographers, even if it is a bad photo that you would never want to print, a bad photo can still indicate what prey was brought it.)

Voles are chubby balls of fur, with short legs and a short tail. They look chunky.

Chipmunks may be leaving their dens any time now, but are substantially larger than the mice or voles.

Birds would generally be obvious by their long, bare legs dangling down (most obvious on chicks, for whom it is too soon). Pigeons would be very plump.

Squirrels should be pretty obvious, like a side of beef.

When feeding the three amigos last year, Buzz brought in primarily squirrels early, and then birds, especially young birds, with chipmunks fairly common, and several snakes. I do not recall seeing him bringing a pigeon. If anyone did, please let me know.

Voles and squirrels would be highly nutritious food for Ruby at this critical time. We have an unusual opportunity to document food preferences at this stage of courtship and breeding, so I encourage people to keep their eyes open and carry a little pen and notebook with them, or document in an email from the site. For those who don’t want to, I fully appreciate just wanting to enjoy the birds.

One final comment. Don’t take any of this for granted. Nothing is guaranteed with a hawk or hawk nesting. We were very fortunate last year. May Buzz and Ruby, and us, be as fortunate this year.