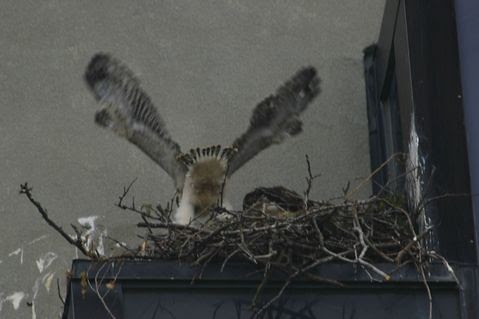 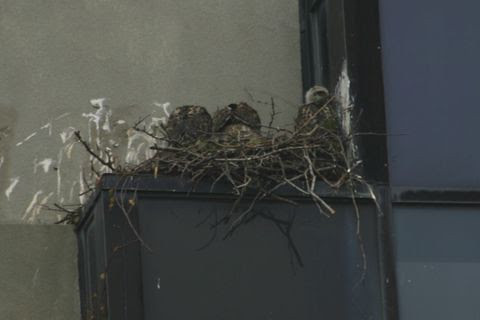 If there isn’t much of a wind and you listen carefully, you can almost hear the three Redtail chicks growing. Some wag might say what I’m hearing is actually Buzz, huffing and puffing, as he supplies fuel to be stoked into the fiery feathered furnaces in the nest. That’s a reasonable surmise, because Buzz is busting his chops to keep four big hawks well fed. That is, three chicks and Mom. “Chicks” actually seems like a misnomer. These are ravenous young females, akin to a human family of teenage boys, only with Redtails, the females grow faster and bigger and stronger than their male siblings, and therefore they eat more (and more..and more.)

Buzz knows better than anyone. Today, in 2.5 hours from 11:30 to 2:00p.m. he made at least four food deliveries. All that I saw were small rodents, apparently mice, not voles. In one case, he made a delivery, left, and flew directly over to the east side of Alewife Brook Parkway, where he crashed into the grass. Seconds later he was back on the roof of 185 with a mouse dangling from his beak. Ruby helicoptered out of the nest up to the southeast corner of 185, next to her mate. He dropped the tasty morsel and she bent to pick it up as though it were a box of Godiva chocolates that might disappear if not held tightly. They sat together, a scene of marital bliss, before she parachuted back into the nest. The kids treated it as chocolate. It was inhaled, orally, supporting reports of kids taking a small rodent and swallowing it whole.

After this last mouse, Buzz disappeared, Ruby retreated back to the southeast corner of the building, and the three kids did what they do so well. Sleep. And grow. Sleeping is when that mouse fur and muscle is transmogrified into feather and muscle. Into bulk. The byproduct is increasingly voluminous streams of whitewash. A word to the wise. If you see a large brown hawk with a whitish head flapping her wings furiously and bowing to the west, do not attempt to enter 185 Alewife Brook Parkway without benefit of an umbrella.

The good news is that Ruby did not attack her image(s) while I was watching, though she spent a fair amount of time sitting on a railing on the south side of the front facing her challenger(s). After the last mouse, she flew up to the southeast corner of the building where she preened her wet feathers for a full thirty minutes. (Are she and Buzz going out of a date tonight?) I’ve had not seen her preening so long anytime this year. (She had even been preening earlier on the railing, facing her image, which suggests she wasn’t feeling too threatened today.) Maybe it was just the 100% humidity. You just know what it can do to hair, I mean, feathers.

Buzz has his talons full. Or he needs to have his talons full, to keep those “chicks” growing. Today was the most frequent set of food deliveries I have seen this year, and none of the prey was particularly large. The kids have not shown any sign of lacking food. Quite the contrary. But I’ve seen very few large prey, such as squirrels, delivered to the nest this spring. That means more hard work for Buzz. Redtails are opportunists, taking what is most readily available. The larger female has a better chance of taking larger, but less abundant prey. The smaller, quicker male has the ability to take smaller, faster, and generally more abundant prey. Last year Buzz brought in a number of squirrels, but also a number of small birds, including Robins and Starlings just out of the nest. I can well imagine Buzz sitting high, looking for Robins and Starling adults delivering food to their nests. Reconnaissance can pay off. He also has some idea as to where clutches of young rodents are emerging from their nests to feed. Lately he’s brought in some small Chipmunks, and earlier he was bringing some many snakes I thought he had to be scarfing them from the reptile house at the zoo there were so many. Whatever, Buzz is obviously up to the task, despite the changing challenge. The next two weeks will be the biggest challenge, however.

The kids, meanwhile, are large. But they are clearly still kids. Last week I was watching the youngest, Whitey. Suddenly his/her eyes seemed to grow huge, though actually they can’t do that at all. Whatever, his expression was priceless as he looked into the eastern sky. I turned around to see a Lufthansa 747 lumbering into the air over Cambridge, wheeling to the west and then south. Whitey, who has been sitting in the back of the nest behind two hulking siblings, had apparently never seen a 747 before. Perhaps he thought that was the largest hawk he/she had ever seen! Yesterday the Bobbsey twins, Alpha and Beta, sat in the front of the nest peering over the edge with necks craned to look below. What aroused their interest I don’t know, but they were really curious. (Could they have been mentally measuring those whitewash shots?)

Whatever, rain or shine, the saga continues, though not for long. Yesterday the Bobbsey Twins had a full set of primaries and secondaries sprouting from the trailing edges of their young wings, with bare bases of feathers exposed on the “wrist” above. Today they were covered with coverts. The underwing coverts are now beginning to come in as well, and the brother feathers are showing through the sheaths on the crowns of the Bobbsey twins. Whitey is still white. Alpha and Beta have substantial tails growing. Whitey has a mere stub of a tail. That won’t last much longer.